BIOS is derived from the acronym for "Basic Input Output System" which is a piece of software or software written in assembly language that regulates the basic functions of a computer / PC hardware device. 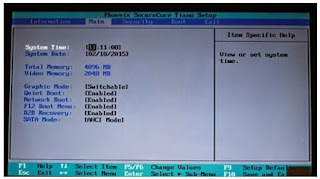 source: dosenpendidikan.co.id
The BIOS resides in a memory chip (ROM or Flash Memory made from CMOS (Comlpimentari Metal Oxide Semiconductor "found on the motherboard / mainboard.
A battery called a CMOS battery has a function to keep the date and other settings that we have set in the BIOS are not lost or return to the original configuration even though the computer / PC has been turned off.

Bios has functions, including:
Identify all hardware / hardware installed on the PC / Computer.
Initialization (ignition), as well as testing of all installed devices (In a process known as the Power On Self Test)
Execute the MBR (Master Boot record) In the first sector on the hard disk, whose function is to call the Operating System and run it.
Set some basic computer configurations (date, time, storage media configuration, boot process configuration / boot sequence, computer performance, and stability)
Assisting the operating system and applications in the hardware setup process using BIOS Runtime Services.

How the BIOS Works

The way the BIOS works is starting from the initialization process, where in the process we can see the amount of installed memory, the type of hard drive and its capacity and so on. Then the BIOS will search, initialize and display information from the Graphics Card.
Then then it will check other ROM devices such as hard drives, then do the RAM test, namely the memory count up test. After all the test components have been successfully carried out, the BIOS will then look for the location of the boot device and also the OS "operating system".

How to BIOS Settings

There are various ways to enter the BIOS menu depending on the BIOS used. For Award and Ami, generally use the Delete key the first time the computer is turned on.
After entering the BIOS, there will be a template like the one below. On the first display there will be a notification about the hardware on your laptop or computer. This is intended to check whether our hardware is read and works properly on the laptop.
In the 2nd screen "Main Tab" there will be time and date settings. Then there is another notification regarding the laptop RAM capacity. Then there are other settings.
On display 3 "Tab Security" is used if you want to provide a password in the BIOS.
In display 4 "Boot" will be used to set the boot on a laptop or computer. Usually before reinstalling, the BOOT settings are set first.
In the last screen there will be a notification regarding Exit and Save BIOS.

ThroubleShooting in the BIOS

Symptoms: Be careful when updating Bios, when you update the wrong version of Bios, the PC does not work and we can't even enter the BIOS.
Solution: Usually the update cannot be canceled, only certain types of motherboards have a BIOS backup on the chip, there is the original type of BIOS that cannot be deleted, to be able to restore it we just need to move the special jumper position which usually already has instructions in the manual. . Then turn on the PC and wait 10 seconds, the original BIOS has been restored, return the Jumper to its original position, and the PC is ready to run again. If the motherboard does not have this facility, the BIOS chip must be sent to the manufacturer, we can see the type of BIOS in the manual. Be careful in the installation not to break the IC BIOS leg or reverse its position.
Symptoms: CPU beeps several times on the speaker and there is no display on the monitor screen, even though the monitor has no problem.
Solution: Beep sounds that there is a certain error message from the BIOS, this sound shows what kind of error is happening on the PC, usually an error in memory is not detected, VGA card, which is not installed properly, the Processor and even the monitor data cable can be the cause. Please check the problem.

BIOS error sounds usually not all motherboards display the same error depending on the type of BIOS.
[AMI BIOS]
Beep 1x: RAM / Memory is not installed properly or is damaged, Beep 6x: Gate error A20 - Shows a damaged keyboard or IC Gate A20 itself, Beep 8x: Grapihic Card / VGA Card is not installed properly or is damaged, Beep 11x: Checksum Error, check the Bios Battery, and replace it with a new one.
[AWARD BIOS]
Beep 1x Length: RAM / Memory is not installed properly or is damaged, Beep 1x Long 2x Short: Damage to the Graphic Card (VGA), Check it can also be installed in the slot does not fit (not inserted), Beep 1x Length 3x Short: Keyboard damaged or not installed. Beep Not interrupted / continuous sound: RAM or Graphic Card not detected.
Damaged / Weak CMOS battery
Symptoms: CMOS Checksum Vailure / Battery Low message appears, caused by the tension that supplies the CMOS / BIOS IC is not normal because the battery is weak, so the BIOS settings return to default / factory default settings, and hardware configuration must be reset.
Solution: Replace the Batrey immediately
Symptoms: CPU hangs frequently.
Solution: There are several factors hanging between them: There is a BadSector on the hard disk, there is a virus, there are problems in hardware such as dirty / damaged memory, dirty / damaged MBoard, cooling fan, the rotation of the fan is weak, the power supply is unstable, you should not force it to use because it will be more fatal.
Symptoms: Computers often appear blue screen what is the cause?
Solution: The Blue Screen message can be caused by a damaged Windows system, it could be from memory, it could be from the hard drive, it could be from other components, depending on the blue screen message that is displayed.
Symptoms: The computer is slower than before, even though at first it was not that slow
Solution: The cause of our computer's slow process there are several factors, namely: Hard disk space is too full, too many programs / software take up hard disk space and memory, there are viruses, hard disk badsector.

The steps to find out the BIOS configuration:
If the computer has been assembled, then immediately turn on the computer to start the mouse boot process, the keyboard must be installed first.
Pressing the del key on the keyboard of most computers to enter the BIOS menu pressing the del key.
Pressing enter on the Standard CMOS Features, the first thing to do is set the time the computer system will use. Set the date on the Date menu, and the time on the Time menu, use the keyboard to change it. Here we also see the cables attached to the motherboard, (SATA)
Now open the Advanced Bios Features menu by pressing the [Esc] key to return to the bios menu, then press enter in Advanced Bios Features, here we can set various features, for example: setting the Boot sequence to set the first boot at post time.
Then next is the Integrated Peripherals, here we can set the USB controller, and manage other systems such as I / O Devices.
Then next is the Power Management Setup, in which we can set the ACPI Function, ACPI Standby State, Power Botton Function, Restore On AC power loss, Wake Up Event setup.
Furthermore, H / W Monitor, here we can see the voltage or heat of a hardware.
Furthermore, BIOS password settings, if we press enter on this menu, the Enter new password will appear, as shown below
Then then we press enter on the Cell Menu, here we can see the CPU frequency, DRAM frequency, etc.
Next we press enter on Load Fall-Safe Defaults, here we can restore the settings we changed in the bios configuration.
Next we press enter on Load Optimized Default, here when we enter it will return all the settings we changed to return to the initial bios settings.
The next menu is Save & Exit. This setup is a menu to exit the setup, and save the changes we made, if we want to save and exit press OK.

If the computer is running smoothly or if there are no problems, there is no need to upgrade (update) the BIOS on our computer. Because it is very risky for those who are not used to it, if you are not careful your computer can no longer be operated. But there are several things that cause the BIOS to be upgraded, for example:
When the computer starts up, it stops suddenly before entering the operating system.
The computer is old enough, and we install new hardware that is not detected properly, for example, we replace a new Processor. Because often the BIOS has not recognized the processor.
BIOS is corrupted, whether indicated by a message or not. For example, invalid BIOS, corrupted BIOS etc.
The BIOS fails to detect hardware, such as hardiks, CD-ROM, VGA and others
Want a little more to optimize computer performance (hardware)
There are recommendations from the motherboard vendor
If the BIOS on the computer is damaged, it cannot automatically run the Operating System like. Several things can cause BIOS damage, for example:
Shutting down the computer without shutdown, or power failure (without UPS)
Exposed to Viruses
Error upgrading BIOS. For example the computer shuts down during the upgrade, the BIOS does not match the motherboard type etc.
If you already experience symptoms like the above, you need to upgrade the BIOS by, among others:

Check the BIOS version on your PC / Laptop